Pharm, Remi Adeseun has been elected as the new chairman of the  O’Trafford Squash Club Ikoyi Lagos, succeeding Mr Larry Ettah, who just completed his tenure of 2 years as stipulated by the Club’s  Constitution.

Adeseun, who was the Club’s Treasurer before his appointment, was  unanimously elected by the members at the Club’s Annual general Meeting over the weekend

He is a Fellow of the Pharmaceutical Society of Nigeria and the Nigeria Academy of Pharmacy, as well as  the Executive Chairman of Rodot Nigeria Limited and also the Chairman of HEWS Foundation. 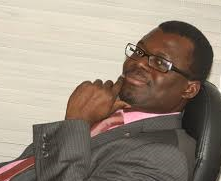 Elected alongside Pharm, Adeseun at the Annual General Meeting which held on Saturday 7th of January are Mr Taye Ige who is now the Vice Chairman; Mr Cyril Ayemere, Secretary; Mr Biyi Mabadeje, Captain, Mr Yomi Adeyemi, Treasurer and Mr Ademola Olusunmade, Publicity Secretary.
In his acceptance speech, Adeseun on behalf of the new executive committee thanked the last exco and stated the exco’s commitment to taking the club to new heights.
Present at the AGM were the members of the club including the members of the Board of Trustees.