Pharm. (Sir) Ifeanyi Atueyi, publisher of Pharmanews, the global health journal, has once again added another feather to his cap, as he was honoured with the Outstanding Professional Leadership Award of Inside Business Africa, on Friday, 13 October, 2017.

Presenting the award certificate, the Publisher/CEO of Inside Business Africa Magazine, Kenneth Odusola-Stevenson, extolled the virtues of honesty, commitment and dedication of Atueyi to Pharmanews and other assignments committed to him. Explaining his steadfastness in the business, Odusola-Stevenson said he was not surprised at the degree of success achieved by the recipient. 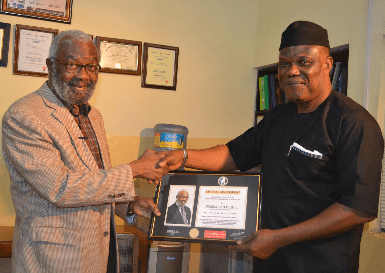 Odusola-Stevenson further described Atueyi as his icon of admiration in many ways -in business, relationship, as a voice in the pharmaceutical industry, as a member of the Full Gospel Business Men Fellowship, “for the number of years I have known him, he has always been an inspiration to me. This is my token of appreciation”.

Appreciating the good gestures of the Inside Business Africa’s boss, of making him the subject of the cover story for his latest edition, Atueyi acknowledged the good spirit of Odusola-Stevenson, noting that rather than being a competitor in the same business of publishing, he had chosen to be a friend of the house.

“Business is not about competition. It is rather finding out what God has created you to do and focus on it. We are all unique individuals and have specific assignments” he said.

Ascribing the success of Pharmanews to God and the contribution of staff, he said God has made it possible for the past thirty–eight years of the publication to maintain a leading position, adding that the journal became a leader from inception, and it has maintained it.

Atueyi thereafter wished him well, praying that as he has honoured him,God will in return prosper him in all his ways.