Following the World Health Organisation’s announcement on the recent outbreak of the Ebola Virus Disease (EVD) in the Democratic Republic of Congo, the Federal Government, through the minister of health, Professor Isaac Adewole has advised citizens on the need to maintain high level of vigilance and personal hygiene, in order to avert the spread of the disease in the country.

The minister, who issued a statement at the weekend on the development, urged every Nigerian, most especially health officials at the ports and those in other facilities, to step up inspection activities and to report any sick person or suspects immediately. Such suspected sick persons are to be referred to the chief epidemiologist in the state where there are present and relevant tests conducted. 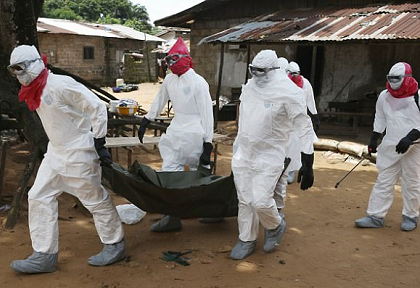 Adewole who advised the general public not to delay in reporting anyone with the signs of the illness, stressed the importance of regular hand washing with soap and water, saying this is one of the one effective ways of keeping the disease at bay.

Assuring the citizens of their protection, he explained how the Centre for Disease Control has been working assiduously to secure the health of citizens.

“The agency has for a while now, been strengthening states capacities to detect, manage and respond to hemorrhagic fevers including Lassa fever and symptoms to look out for include; fever, fatigue, weakness dizziness and muscle aches.

“Patients with more severe cases show bleeding under the skin, internal organs or even from bodily orifices like mouth, ears, and the ears,” he added.

The WHO had reported the outbreak of the epidemic in Congo DR, with three lives lost already, while the outbreak was confirmed from tests on nine people who came down with a hemorrhagic fever in Bas-Uele province in the northeast of the country on or after April 22.

It would be recalled that Nigeria was declared free of Ebola virus by the WHO in October 2014 and the country praised for its handling of the disease which caused about 4,500 deaths across‎ West Africa.