For many, the holidays are indeed the most wonderful time of the year.

Families and friends come together and enjoy food, good cheer – and, often, alcohol.

Commercially speaking, alcohol and the holidays seem to be made for each other. Alcohol can be a quick and easy way to get into the spirit of celebration.

And, it feels good. After two glasses of wine, the brain is 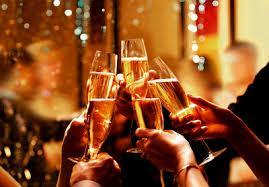 When the dopamine molecule locks on to its receptor located on the surface of a neuron, or basic brain cell, a ‘buzz’ occurs.

It is often desirably anticipated before the second glass is empty.

There are those, however, who drink right past the buzz into intoxication and, often, into trouble.

For them, the brain starts releasing the same enjoyable dopamine, no different than what happens in the casual drinker’s, but it doesn’t stop there.

A compulsion to binge drink can result.

As someone who has studied alcohol use disorder for over 15 years and who has treated thousands of patients who have it, I think it’s a major, yet often poorly understood, public health problem.

Our culture seems to be moving beyond the point of labeling those with opioid addictions as ‘weak,’ and I hope we can do the same for those with alcohol use disorder, too, which is more widespread than people may appreciate.

Excessive drinking accounted for one in 10 deaths among working-age adults in the United States.

Although alcohol can feel as though it is relieving stress, it contributes to 88,000 deaths in the United States each year.

That is more than double the number of people killed by heroin and opioid prescription drug overdose, another major public health crisis, in 2014.

In addition, more than 66.7 million Americans reported binge drinking in the past month in 2015, according to the recent report on addiction by the surgeon general.

The consequences to the individual and the family are staggering, affecting physical and mental health, an increased spread of infectious disease, reduced quality of life, increased motor vehicle crashes and abuse and neglect of children, to mention a few.

Scientific study of the brain has helped explain binge drinking even if it may be hard for family and friends to understand.

It’s defined as drinking five or more drinks for men and four for women on the same occasion on at least one day in the past 30 days.