Deacon Adebowale Robert Tade is a pharmacist of repute whose vast experience in pharma marketing, administration and human resource management is renowned. In this interview with Adebayo Folorunsho-Francis, the former Pfizer Specialties and Livestock Feeds Limited czar chronicled his journey, trials and triumph with the multinational company. Excerpts:

My first experience was with Burroughs Wellcome. I was one of those who first launched Septrin, Actifed, Neosporins and some others. I later moved up north and worked with Beecham. At a point, I wasn’t satisfied with the state of things at the company because I was the only sales representative covering most of the then northern states up to Lake Chad. I was always busy travelling from one end to the other. Eventually I got fed up. One day, I paused and asked myself what I was doing in the Chad area. I left the company and returned to the south.

At what point did you join Pfizer?

I got an appointment with Pfizer after I went back to the south in 1973 as a medical representative. I got promoted as the ethical product manager in 1975, after some very competitive on-the-job tests and interviews. Thanks to Pharm. Douglas Egbuonu for his forthrightness and the Late Pharm. Dr Fred Adenika for his thoroughness and leadership. I moved in quick succession from product manager in 1976 to marketing manager in 1978 and head of the pharmaceutical division as division manager in 1981. By dint of hard work, I worked my way up to becoming Pfizer’s deputy managing director in 1985, the first Nigerian pharmacist to be so appointed and also elected to the Board of Directors of the company.

Many believe rising to become Pfizer’s deputy managing director (DMD) was perhaps your greatest achievement. How would you react to that?

I wouldn’t say my position as DMD was my biggest achievement. I happened to be the first Nigerian pharmacist to be on the board of Pfizer Products Plc in 1985. You can imagine all the pharmacists around me then. They were full of joy. The likes of Sam Ohuabunwa, Ajibade Adeshina and the late Dr Olukoya. We had all been looking forward to the time when a Nigerian would be on the board of great Pfizer. We had some pharmacists who passed through Pfizer but never made it to the board. They were there partly as managers.

Do you remember any of such managers?

In those days, someone like Julius Adelusi-Adeluyi was a general manager but was never brought to the board. In fact, he did not stay for too long. A very energetic guy, Julius was always on the move. I was then the deputy managing director for Pfizer at that time. But I didn’t see it as my greatest achievement actually. In fact, when I relocated to livestock feed to be chairman and managing director, I still did not see that as my biggest achievement. What many people missed out on my profile is that in 1998, I became the country manager/managing director of Pfizer Anglophone West Africa. That is one area I know many people miss out when writing about me. I ran Livestock Feeds from 1998 and retired in 2005. I would see myself as the longest serving Nigerian pharmacist on the board of Pfizer.

What then led to the management buy-out that allegedly divided Pfizer?

My good professional colleague and respected junior, Mazi Sam Ohuabunwa, was made chairman/managing director of Pfizer Products Plc.  In 1998, Pfizer thought it fit that their 100 per cent other outfit, Pfizer Specialties Limited, needed a Nigerian head and I was appointed chairman/managing director of Pfizer Specialties Limited.

How was the structure of the place when Pfizer divested?

The person managing Pfizer Specialties, one Frenchman, whose name I cannot recall at the moment, was reassigned to another location in Pfizer Europe. That was how I became the chairman/managing director of Pfizer Specialties. It was in that position that the likes of Lere Baale were reporting to me as marketing director while people like Yinka Obadina were reporting to me as finance director as well as the human resource manager and other directors. I was in that position till July 2005.

In all, I spent about eight years on that seat. That probably made me the longest serving Nigerian Pharmacist as chairman and managing director of Pfizer Specialties and many of its outfits anyway. I believe the reason such key information is often missed out is probably because I still retained my chairmanship of Livestock Feeds Plc (non-executive chairman).

Do you now understand? That indeed overshadowed my position as chairman/managing director of Pfizer Specialties Limited. So that is me!

Which did you find most challenging among all the appointments you had?

If you ask for the most challenging, I would say the one I had as chairman/managing director of Pfizer Specialties Limited. Beside Nigeria, I was in charge of Ghana, Liberia, Sierra Leone and The Gambia. Not just that, I was on the board of the companies there.

How many Nigerians do we have, even to date, with such responsibilities – chairman/managing director of their companies in Anglophone West Africa? That was my job and I found it quite challenging. We were actively on ground, not on paper.

Prior to my assumption to that office, such responsibilities attached to the position, including the ones held by the Frenchman, were merely seen on paper. But now, the actual work had begun. We operated in Ghana, Liberia, Sierra Leone, The Gambia and, of course, Nigeria. Such a huge task it was!

You can imagine the several times we travelled there, we made use of Slok Airline that belonged to that former governor of Nigeria (Orji Uzor Kalu). We would fly Slok Airline to Ghana; it was that same Slok that would take us to Sierra Leone and other countries.

How did you manage to tackle all these challenges head on?

You remember that I told you I had able lieutenants like Lere Baale, who is still quite active and energetic to date; the finance director and also my marketing directors. Of course, we made sure that we had good people on ground to do the job. I guess that aptly sums up my 32 years of working with Pfizer.

Many people see the newly appointed NAFDAC boss as another Dora Akunyili. Do you support this notion?

Well, Dora stood for something which was passion. Passion for the job at that time. Fake and counterfeit drugs everywhere. She understood the hazard and the impact on Nigerians. She knew all those and still developed that passion to tackle it. It was that passion that saw her through the hazard of the job successfully.

Dora knew a lot about all these fake drugs, substandard medicines, parallel imports and those things that were wrong with the system. And she came out to do a corrective surgery and sanitised the system. The man who came after her (Dr Paul Orhii) was just another appointment. He came with no passion! He was busy with his people thinking, ‘Oh! This is a big job of us (doctors).’

So, this new lady (Prof. Mojisola Adeyeye) being a pharmacist, I have no doubt that she too will develop the passion. The keyword here is passion. Dora had it; I believe this one too will do exactly the same thing. We need someone who is very disciplined, just as Dora was. If I may ask: Who could attempt to bribe a Dora? I repeat, who? (laughs). Don’t forget our motto that says ‘As men of honour, we join hands to make Nigeria great again!” 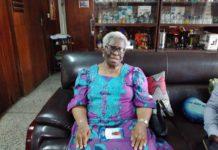 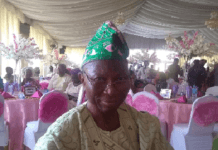 How I Influenced ACT Adoption in Malaria Chemotherapy – Prof.  Ogunbona

My odyssey into the world of pharmacy practice – Chief Akinkugbe (VIDEO)