Pharm. Adebayo Afon is the managing director and chief executive officer of Safco Mega Solutions, a pharmaceutical wholesale company that supplies branded generics and over-the-counter pharmaceuticals to a wide range of customers. He is also the owner of Afonches Pharmacy Limited, a chain pharmacy outlet with eight branches around Lekki and Ajah areas of Lagos State.

Born in the ancient city of Ogbomosho, Oyo State, Nigeria, Afon bagged a Bachelor of Pharmacy degree from the University of Benin (UNIBEN) in 2000. He began his career at the Federal Neuro-Psychiatric Hospital, Yaba, Lagos, as an intern between the year 2002 and 2003, which afforded him the opportunity to obtain valuable experience in pharmaceutical care services, under the supervision of seasoned pharmacists and healthcare practitioners.

As a prudent son of his late father, Pharm. Solomon Adegboyega Afon, the junior Afon successfully managed his father’s company, Safco Chemist Limited, located in Benin City, Edo State, for 18 years, before it was liquidated and  Afonches Pharmacy Limited, a retail pharmacy which has now grown to a chain pharmacy, was established in the year 2004.

Afon, an entrepreneur par excellence, with the passion for diligence and excellence, forged ahead to establish  Safco Mega Solutions, a pharmaceuticals and healthcare wholesale distribution company in April 2016, a date which coincided with the 30th anniversary of the death of his father and founder of the defunct Safco Chemist.

A passionate practitioner with special interest in effective and efficient drug distribution system in the country,  Afon went into wholesale drug distribution with the aim of correcting the anomaly  of ineffective supply chain system, traceable to monopolistic pricing system, delay in delivery, product hoarding, insufficiency of products and stiff market conditions imposed on pharmaceutical retailers in Nigeria, especially those in Lagos State.

To further boost his drive as a result-driven individual with demonstrated skills in establishing and expanding new frontiers through in-depth market research and aggressive sales strategy, Afon has attended several local and international conferences, including the International Pharmaceutical Federation Conference (FIP), held in Dublin, Ireland in 2013, and several other local conferences and seminars.

Afon is a committed and active member of the Pharmaceutical Society of Nigeria (PSN), Association of Community Pharmacists of Nigeria (ACPN), as well as other numerous professional associations. He is the incumbent vice chairman, ACPN, Eti-Osa Zone, and has been commended for his activities towards the progress of the association in Lagos State and beyond. 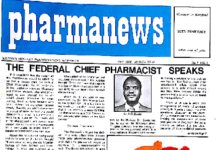 The Birth of Pharmanews