Nigeria has recorded new 403 cases of COVID-19, making a total of 16085 cases since the outbreak of the infection in the country.

The Nigeria Centre for Disease Control, NCDC statistics as released at 11:53 PM on 14 June 2020, revealed that the no new state has reported a case in the last 24 hours. 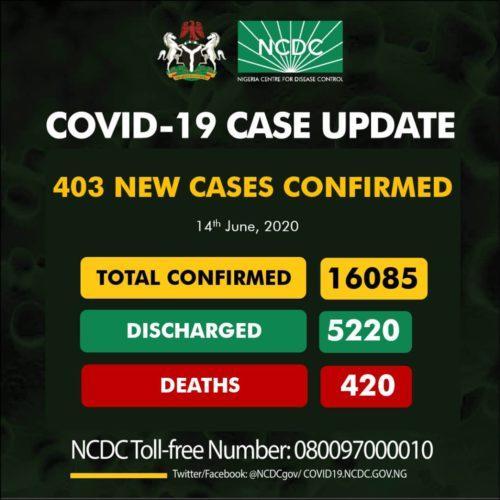 The agency said it recorded 13 deaths on Sunday, making total fatality from the infection 420 in the country, while a total 5220 patients have fully recovered and discharged.

While the new record of 403 cases for Sunday was relatively lower than the figures recorded for the two previous days of Friday and Saturday, which were 681 and 627 respectively, the agency said there may be more cases in the coming days.

According to its daily update on its Twitter handle, the agency said: “On the 14th of June 2020, 403 new confirmed cases and 13 deaths were recorded in Nigeria.