Nigeria has recorded new 490 cases of COVID-19, making a total of 17148 cases since the outbreak of the infection in the country. 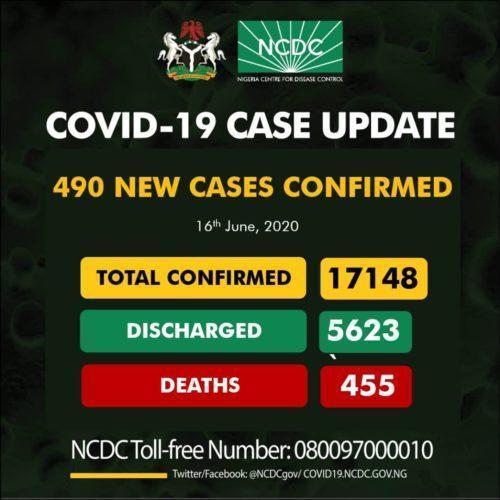 The Nigeria Centre for Disease Control, NCDC statistics as released at 11:53 PM on 16 June, revealed that the no new state has reported a case in the last 24 hours.

The agency said it recorded 31 deaths on Tuesday, making total fatality from the infection 455 in the country, while a total 5623 patients have fully recovered and discharged.

Of the 490 new cases reported, Lagos took the lead with 143 cases, followed by FCT with 60 cases, then Bayelsa 54, Rivers 39, and others.
According to its daily update on its Twitter handle, the agency said: “On the 16th of June 2020, 490 new confirmed cases and 31 deaths were recorded in Nigeria.