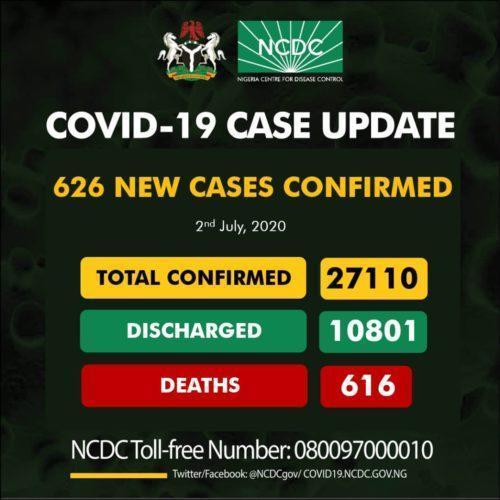 Statistics released by the Nigeria Centre for Disease Control, NCDC, Thursday night has shown that Nigeria has crossed the mark of 27,000 infections with 626 new cases.

In a tweet by the NCDC, it was declared that Nigeria’s total burden for the infection was 27,110 cases with Lagos State having the highest number of fresh infections for the day – 193.

The health agency also disclosed the breakdown of the new cases, as recorded in 20 states in Nigeria.

It said Lagos is followed by the Federal Capital Territory (FCT) with 85 fresh cases of the virus with Oyo State having 41 persons infected.

Emembolu, Winner, 2020 PANSite of the Year Receives Plaque, Cheque from...

One in Three Women Suffering from Lockdown Loneliness