Pharm. Olabode Ajayi Ogunjemiyo is the new chairman, Pharmaceutical Society of Nigeria (PSN), Ondo State Chapter. In this interview with Pharmanews, immediately after the 34th Annual National Conference of the Association of Community Pharmacists of Nigeria (ACPN) tagged “Sunshine 2015” which was held in Akure, Ondo State, the one-time secretary of the Ondo PSN expressed his views on pharmacy practice in the state.

Pharm. Ogunjemiyo who took over the chairmanship of the PSN, Ondo State from Pharm. Samuel Adekola, having served the PSN in various capacities for twelve years, also revealed the strategy put in place by the state government as well as the PSN to rid the state of fake and unwholesome drugs. Excerpts:

As the chairman of PSN in Ondo State, what is your assessment of pharmacy practice in the state?

Pharmacy practice in this state has evolved over the years. And it keeps evolving as I speak because the profession is faced with different challenges on daily basis. So to the best of my knowledge, the practice is good because we have never failed since I joined the executive in implementing the policies of the PSN national. Our challenges have given us the opportunity to think outside the box.

If I must be sincere, the issue of fake and counterfeit drugs has been one of our major challenges. But as I speak now, the state government has purchased a machine called ‘Truescan’ which is being used by the National Agency for Food, Drug Administration and Control (NAFDAC) to detect fake and counterfeit medicines. And by virtue of my position as the chairman of PSN in this state, I am a member of the State Task Force Team on fake and counterfeit medicine. The team is saddled with the responsibility of using the machine to detect fake and unwholesome drugs. So, apart from NAFDAC, Ondo State is the only state in the federation that has this machine and we are hopeful that by the time the machine is put into full use, the issue of fake and counterfeit drugs will be reduced if not totally eradicated in the state. This way, practitioners, as well as the public, will begin to have confidence in the drugs purchased in the state.

I want to assure everyone that now that the machine has arrived and efforts are in top gear to rid the state of counterfeit and fake drugs, we have embarked on aggressive orientation and awareness programmes throughout the state. People are now more enlightened about the dangers of fake drugs; so they have begun to source their medicine from the right places. Also, all those who deal in the business of drug selling in the state are now more careful about where they source their products from. I want to believe, and this is not a matter of boasting, that before the end of this year, 2015, the issue of fake and counterfeit drug would have been a forgotten issue in Ondo State.

How lucrative is pharmacy practice in Ondo State?

As the chairman of PSN in the state and from my experiences over the years, I have seen that pharmacy practice, especially the community aspect, is really thriving in the state. This is not to say that we do not have some pharmacists that are not doing too well because we do not expect everybody to be going at the same pace, but some people have made it.

It must be said though that community pharmacy practice is capital intensive. So it is the amount of money you invest in it that determines your output. And that brings me to one of the challenges facing community practice, which is money. The interest rates commercial banks demand on loan is really killing the practice for the practitioners. Still, the practice is thriving for as many people that play by the rules, follow ethical practices, trust in God and deliver good pharmaceutical services to the people.

What is your view on retail chain pharmacy in Nigeria?

This is another major issue; but as far as I know, we in Ondo State are not opposed to retail chain pharmacy. It is a good idea, but it must come with a proviso, which is that all the outlets must be manned by pharmacists at every point in time. This actually is what the PSN has been emphasising.

We vehemently frown at the idea of leaving the chain outlets in the hands of non-pharmacists, as we believe that a pharmacy should be manned by a superintendent pharmacist. Pharmacists can also come together to open an outlet and register it in the name of one person which is renewable on yearly basis. And once the business starts bringing in money, they can open another one somewhere else which should be registered in the name of another pharmacist. What that mean is that a pharmacist can only use his or her name to register only in one place. It is a good idea as it will encourage people that have passion for the profession to come together to form a chain. It is not for every Tom, Dick and Harry to come together for a chain as that would negate the ethics of the profession.

What pharmacy is all about and what we preach now is pharmaceutical care; money-making is secondary. This is why we need passion to do well as pharmacists. So, I support chain pharmacy and I know that most pharmacists will also love the idea; but the existing law which makes the establishment of retail pharmacy the exclusive right of pharmacists or group of pharmacists should be maintained.

What is your assessment of this year’s ACPN national conference hosted by your state?

The challenges encountered at the last conference in Uyo, Akwa Ibom State, taught us so many things. That was why we decided to go for an indoor hall that would make our exhibitors as well as the participants happy. And we are happy that, at the end of the day, all the pharmaceutical companies that came to exhibit and the participants that came from all over the country were satisfied with what we did. The conference was a memorable one in the minds of so many people.

READ
Academic Pharmacy Pays For Those Who Are Patient- Prof. Babalola 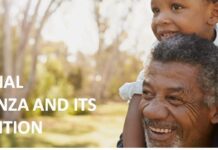 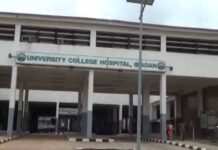 Consultancy Cadre: UCH Commences Implementation for Pharmacists on CONHESS 13 & Above 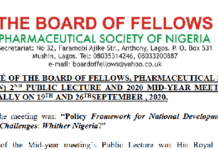