The conference organised by the Sickle cell Support Society of Nigeria (SCSSN) in collaboration with Pfizer Nigeria, came to a conclusive end on Friday with lots of sterling outcomes on the treatment, management and control of sickle cell disease in Nigeria.

The conference, held in Enugu State, drew participants, stakeholders, partners and sponsors from all walks of life. The theme of the conference:  “Reducing the burden of Sickle cell disease in our communities” was anchored on raising awareness for Sickle cell disease(SCD) increasing the understanding  of the disease among the communities health workers;  to review the activities of the society with a view to hearing from SCSSN members who were on scholarship to pursue their post-graduate degrees in Brazil; to outline research and training priorities; update current level of knowledge about the different aspects of the pathophysiology and management of Sickle cell and to hold a meeting of the West African Sickle Cell Network, high Nigeria is a host country. 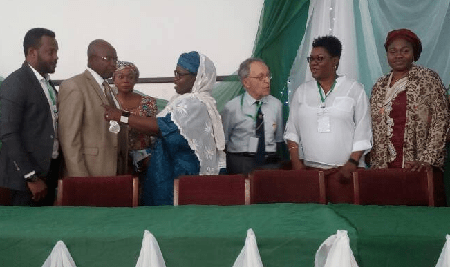 The 3-day conference kicked off with a pre- conference workshop with community health workers in the state. The keynote speaker, Professor of Hematology, Muhumbili University of Tanzania Lucio Luzzatto, shared the concern of stakeholders by calling on the Government to pass a bill on sickle cell control and management, for a better life insurance for people living with the sickle cell disease.

The Medical Director of Pfizer, Dr Kodjo Soroh, noted that the high death rate of Sickle cell disorder can be prevented through proper management and increased disease awareness programmes in rural areas. He stressed that Pfizer will continue to support activities on how policies can be improved to adequately impact on Sickle cell patients.

He said there is no way Government can better manage the situation without making policies that will guarantee treatment for people with the disease.

As a  major sponsor for the 2017 SCSSN conference, Pfizer Nigeria expressed her commitment to partner with the Government and stakeholders that are willing to make feasible policies towards reducing the burden of Sickle cell in the country.

A Professor of Pediatric Hematology and Chaiman, Sickle Cell Support Society of Nigeria, Professor Adekunle Adekile has called on the Government to support the Sickle Cell Society in order to reduce the burden of the disease in the communities. He also identified poor leadership on the part of the Government as being responsible for the snail paced action against Sickle Cell in Nigeria and called on the National Assembly to revisit the Sickle Cell Act brought before the house four years ago with a view to passing it.

“The chunk of the problem lies on the Government because over the years, they have paid lip service to Sickle Cell Disease control and management. The Government should make policies on SCD a serious one so that life of patients can be insured. The National Assembly should revisit and possibly pass the Sickle Cell Act to ensure that people with the disease are covered”, he said.

According to Adekile, Sickle Cell is a disease that is common all over the world, particularly in Nigeria which has the largest burden with a total number of 1,500 children born every year with the disease. Adekile said that the problem of Sickle cell is pervasive and many of the patients live in the rural areas, pointing out that the care in the tertiary or secondary centres are not enough. He regretted that the Government has not paid adequate attention to tackling Sickle Cell Disease noting that the disease cannot be controlled until a comprehensive National policy for the Control and management of the patients is introduced

On her part, the Director, Corporate Affairs Pfizer for Sub-Saharan Africa, said the community networking is critical to achieving the aim of reducing the burden of Sickle Cell in our communities. She noted that Sickle Cell is not a death sentence even as she advised parents to always identify with organisations that are committed to tackling the scourge.

Also speaking during the conference, the Director, Comprehensive Sickle Cell Centre in Ghana, Professor Kwaku Frempong said that most people who are born with Sickle Cell disease in Africa are not diagnosed and many of them die as children. He observed that Government are not aware of the impact of SCD on childhood mortality while noting that there is no country in the whole of Africa that has programmes for new born screening.

“Our Government must step up measures and provide some supplements so that people can be treated as the medical cost is usually beyond what people can manage”, he said.

The Marketing Officer of Assene-Laborex Limited, a subsidiary of Biomedomics, Pharm Santos Onuigbo, charged young people to know their genotype early enough before going into marriage, adding that the company is committed to ensuring that people get the awareness about their state and better treatment against the disease.

He maintained that the company is partnering with Non-Governmental Organizations to get maximum grassroots moblilisation against the disease.

A participant at the conference, Miss Grace Ocheigo, a student participant from Obafemi Awolowo University, OAU was all praise to SCSSN for another opportunity to interact and meet people that would have cost much to meet were it not for the meeting. The student participant said the student have a greater role to play in curbing the burden of the disease.

“I want stakeholders to use students in the campaign to reduce the burden of the disease in the country because they are more vibrant and are closer to SCD patients that are older people.

Young people relate more their problems to their peers and when these students are speaking it will have more effects because youths are naturally keen to listen to their mates on an issue. By so doing, they open up, the students will then know how to follow them up” she said. She appealed to the Government and the NGOs to make screening materials available to medical students so that they can be fully engaged in the process in as much as grassroots mobilisation is concerned. Other participants at the conference praised the meeting and said it gave them the opportunity to ask questions pertaining to clinical practice which were answered by seasoned practitioners. They also said the meeting enabled them to network and be involved in collaborative research into new trends in Sickle Cell disease.

Sickle Cell is a disease that is not as popular as malaria, tuberculosis and AIDS, but tons of babies born each year around the World inherit the disorder according to reports. The disease is got by inheriting two copies of a defective gene from each patient. In the process, the red blood cell gets collasped, forming crescent moon-like shapes, which make it difficult for oxygen to be transported to all parts of the body.

In an interview after the conference, the Vice-Chairman of SCSSN in Nigeria, Prof Obiageli Nnodu said that about 3.6 million Nigerians are affected by the Sickle cell disease which represents 2% of the country’s population. Professor Nnodu who is also a consultant Gynaecologist said apart from those directly affected, 25% of Nigerians are carrying the gene and therefore noted that there’s every need to tackle its prevalence. She said Sickle Cell Support Society of Nigeria is an umbrella body that brings together professionals, advocates, and other interested parties both within the country and in diaspora to tackle different aspects of Sickle Cell disease.

The Professor of Gynaecology said SCSSN has a special focus on the coordination of different groups, bodies and organisations working on Sickle Cell disease who hitherto done their programmes in an uncoordinated manner. The SCSSN Vice- Chairman called the Ministry of Education to include Sickle Cell education in the country’s schools curriculum, so that from primary level children would have the necessary knowledge about Sickle Cell disease and can as well educate their parents who are not exposed to such health problem. She said that since 2010 when the umbrella body came into operation the activities of groups and bodies working on Sickle Cell have received a boost through coordination.

According to her, “Before 2010 many people were working on Sickle Cell, they were individualised and uncoordinated but this umbrella body has brought everyone together for effective and coordinated work. We have achieved many goals within the period which include a handbook on Sickle Cell that is available in our website, but most importantly is the use of instant Sickle Cell kit which we subjected to clinical evaluation to ensure it is effective in finding the gene status of persons.

We have worked with the Federal Ministry of health to develop uniform guidelines and strategic planning for efficient delivery of Sickle Cell Programmes among others”. She said.