The recent announcement by the World Health Organisation (WHO) confirming new cases of Ebola Virus Disease (EVD) in the Democratic Republic of Congo has once again heightened the fear of a possible resurgence of the disease in Nigeria. This concern is understandable, considering the circumstances that surrounded the last outbreak of the disease in the country and the harrowing ordeal to which Nigerians were subjected before it was finally contained.

It would be recalled that the last Ebola outbreak which rampaged the West African sub-region first started in Guinea in 2013 before spreading to Sierra Leone and Liberia.  Sadly, despite repeated warnings for Nigeria to take proactive steps against the spread of the disease into its borders, it was still allowed in through Mr Patrick Sawyer, a Liberian. And from July 2014, when this first confirmed index case of the disease was announced, to October of that year, when WHO announced that the country had become Ebola-free, Nigerians lived in palpable, nerve-wracking fear of the disease.

Within the period that the deadly haemorrhagic fever persisted in the country, it resulted in loss of lives and serious socioeconomic disruptions. Schools were shut, already scheduled programmes were cancelled and there was general unease in the country. And, indeed, before the disease which caused about 4,500 deaths across West Africa was contained, it had infected 19 Nigerians, of whom seven died. 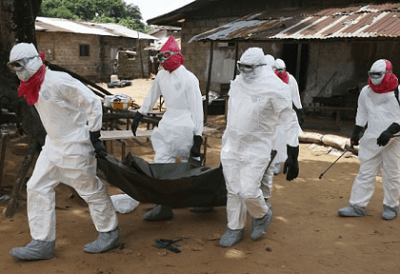 While the Nigerian government and, in fact, all Nigerians deserve accolades for swiftly containing that Ebola outbreak, it must be emphasised that lack of adequate preventive measures was a major reason the pandemic was able to spread to Nigeria. It may be interesting to know that, in the wake of that outbreak, some countries in the sub-region went as far as completely closing their borders against visitors from countries affected by the disease. While this may be considered too drastic, it is actually an indication of the extent that some nations are willing to go to protect their citizens. It is therefore expedient to stress that Nigeria must do all that is necessary to avoid being caught napping again.

It is commendable that the Nigerian government recently announced some measures aimed at fending off any possible outbreak of the disease. These include setting up of a 10-man emergency team, comprising frontline medical workers, to be on standby for immediate deployment and response to any part of Nigeria that should report any case of the disease; calling for rigorous screening at all the nation’s borders, to ensure probable cases are identified and quarantined; as well as urging health care providers and the general public to be vigilant and intensify awareness on the symptoms of Ebola.

However, it must be reiterated that this nation should, by now, not be resorting to panic measures like creating an emergency team to tackle public health emergencies. No matter how effective reactive measures like these are to containing public health emergencies, they cannot be compared to having well-defined precautionary measures in place that are automatically activated whenever the need arises.

It is our view that considering the nation’s experience with Ebola in 2014, we should have moved beyond emergency committees to preventing this and other pandemic diseases. Right now, this nation should have developed a standard operating procedure (SOP) that is well known to all Nigerians in case of these types of emergencies.

We call on the Nigerian government, through the Federal Ministry of Health and the Nigeria Centre for Disease Control (NCDC), to wake up and deliver on its mandate of protecting the health of Nigerians. This must be considered a topmost priority, as only a healthy nation can be productive, progressive and prosperous. The NCDC, in particular, must begin to demonstrate clear capacity to control disease outbreaks in Nigeria. Awareness campaigns and citizens’ mobilisation through both the conventional and the social media must be part of the SOP and should be deployed all year round, and not just when a disease has broken out or when it seems imminent, as is the case now.

It must equally be noted that a major challenge with containing disease outbreaks in this clime is the usual inadequacy of preventive or curative vaccines.  This was indeed the case with the recent meningitis outbreak. The government therefore, in addition to all its announced measures to prevent another Ebola outbreak, must also start sourcing for essential medicaments (drugs/vaccines) that may be required for treatment. The government should not wait till after the outbreak before starting to scramble for these remedies.