About 600 years ago, the Swiss physician and alchemist Paracelsus stated that all that man needs for health and healing has been provided by God in nature, and the challenge of science is to find it. Indeed, to Paracelsus, who was one of the most influential medical scientists of the German renaissance, as well other physicians of early modern Europe, for every disease affecting mankind, there is a plant out there for its treatment.

Today, even with the incredible medical breakthroughs achieved with gene therapy and recombinant DNA technology, many medical scientists still look into nature to find cures for many diseases affecting man. One of such is Professor Ernest Izevbigie, current vice chancellor of Benson Idahosa University, Benin City, and former professor of Cell Biology and Biochemistry at Jackson State University, Mississippi, USA. 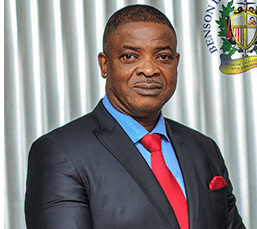 The globally acclaimed researcher and inventor is among the very few African scholars who have been admitted as Fellows of the United States National Academy of Inventors (NAI) for his ground-breaking research on the use of Vernonia amygdalina (bitter leaf) a popular Nigeria herbal shrub for cancer phyto-chemotherapy. The NAI Fellow status is a professional distinction accorded to academic inventors having patents issued from the U.S. Patent and Trademark Office (USPTO) who have demonstrated a highly prolific spirit of innovation, in creating and facilitating outstanding inventions that have enhanced the quality of life, economic development and welfare of the society.

Professor Izevbigie has to his credit 6 USPTO patents including a formula he created from Vernonia amydalina which is potent in the management of diabetes, prostate enlargement in men and breast cancer in women. He has also registered three pharmacological formulations called Edotides in Nigeria with the National Agency for Food and Drug Administration and Control.

In all, his patents include:

READ
You’re One in a Lifetime – Be Yourself

Prof. Izevbigie’s research led to the formation of the Jackson State University initiated company called EdoBotanics. The company uses modern technology to extract, process and standardise compounds from bitter leaf to produce the nutritional supplement called edoTIDEplus that promotes gastrointestinal, breast and prostate health. It is also potent in boosting the immune system and helps with the side effects of chemotherapy and radiation. The product is in high demand in Europe and America because of its uncommon efficacy in the management of diabetes and cancer. The Nigerian government gave the company its approval to manufacture and sell the dietary capsules in the country in 2012.

Professor Izevbigie was born into the Izevbigie family in Benin City, Edo State Nigeria. He completed his primary and secondary education in 1978. Four years later, he was in the United States of America (USA) for his tertiary education. He received his bachelor’s degree in Animal Science (with distinction) from the University of Tennessee, Knoxville, Tennessee, USA in 1986 and a master’s degree from the same university in 1988.

After his master’s degree, Prof. Izevbigie worked as a research assistant, at the Cellular and Molecular Biology Department, Michigan State University, East Lansing, Michigan, USA from 1992 to 1996. He received his Ph.D. degree in Growth Biology/ Biochemistry from the same university in 1996. Thereafter, he pursued a post-doctoral training in cancer biology at the Laboratory of Molecular Signalling, Cellular Development and Oncology, National Institute of Health in Bethesda, Maryland. There, he developed a passion to apply modern scientific techniques to investigate the health benefits of some Nigerian herbs, especially the bitter leaf.

Interestingly, Prof. Izevbigie’s fascination with the bitter leaf did not start from his university days; it actually dates back to his childhood days. According to his recollections, he used to watch his grandmother who practised herbal/alternative medicine use bitter leaf to treat patients, with remarkable results.

After completing his post-doctoral training in 1999, Prof Izevbigie launched his academic career as an assistant professor of biology at Jackson State University, where he mentored undergraduates, masters and PhD students. His publications are in the area of Cell Biology, Biochemistry, and Pharmacognosy. He rose to the rank of a full professor at the university in 2008/2009.

In 2011, Professor Izevbegie was appointed deputy vice chancellor of Benson Idahosa University (BIU), Edo State, where he is now serving as the Vice Chancellor. Because of his enviable record and achievements, BIU became the first university in Africa to be admitted as a member of the prestigious National Academy of Inventors which has over 60 other universities worldwide.

Professor Izevbigie has received many awards and honours, including:

All content on this website (including text, graphics and pictures) is the property of Pharmanews Limited and protected by local and international copyright laws. No part of the content can be copied without due acknowledgement of www.pharmanewsonline.com as the by-line of the story.
Contact us: info@pharmanewsonline.com
Follow us on Facebook
Information
© 2020, Pharmanews Limited. All rights reserved.
Need Help? Chat with us
Enquiries? Chat with our agents
Hi! Click one of our member below to chat on Whatsapp
The team typically replies in a few minutes.
Temitope Obayendo
Online Adverts & Digital Marketing
Omolola
Customer Service
Elizabeth Amuneke
Admin Manager
wpDiscuz
1
0
Would love your thoughts, please comment.x
()
x
| Reply
MORE STORIES