Pharm. Gbenga Olubowale, former chairman, Pharmaceutical Society of Nigeria (PSN), Lagos State Chapter, has noted that over 300 million people are unknowingly living with viral hepatitis worldwide, stressing that without identifying such people and linking them to care, millions will continue to suffer globally from the disease.

Olubowale disclosed this while speaking at a public awareness campaign on hepatitis, organised by the Rotary Club of Gbagada, District 9110, Nigeria, in partnership with the Association of Community Pharmacists of Nigeria (ACPN).

The hepatitis campaign simultaneously took place in August at the national secretariat of ACPN, Opebi, Ikeja, Lagos, Gbagada General Hospital, Gbagada Lagos and the New Iju Agege Garage, Agege, Lagos, with the focus being to enlighten and screen hundreds of patients as well as to administer vaccines free of charge.

Speaking further, Olubowale who is the chairman, Committee on Hepatitis Zero World Eradication Project, Rotary Club of Gbagada, defined hepatitis as an inflammation of the liver, which he said can either be self- limiting or progress to fibrosis, cirrhosis or liver cancer.

According to the former PSN chairman, the theme of this year’s World Hepatitis Day, “Find the Missing Millions” was strategic, coming at a time when there was need to create awareness among Nigerians on how to prevent hepatitis spread, adding that there was need to act immediately to stop people from dying needlessly from the disease.

Speaking in the same vein, President, Rotary Club of Gbagada, District 9110, Rotr Akinwale Odutola, said that the club had embarked on the initiative in collaboration with ACPN, as a way of carrying out its corporate social responsibility and improving the wellbeing of the people in the area in which it is domiciled.

According to him, viral hepatitis has remained a major killer of people with a vast majority of patients being unaware of their infection status until it becomes chronic or fatal, adding that dying of viral hepatitis in Africa is becoming a bigger threat than dying of AIDS, malaria or tuberculosis. 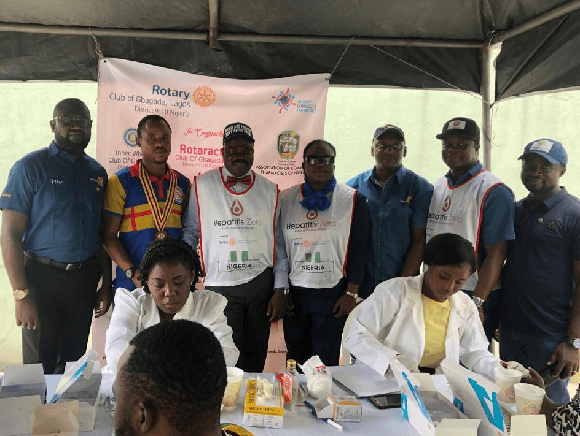 Speaking further, Odutola lamented the increase in the number of people with the disease, stating that this is largely due to  ignorance of its mode of transmission, prevention and treatment.

In a show of gratitude, Rotr Odutola commended the leadership of ACPN, as well as Gbagada General Hospital, for creating an enabling environment for the hepatitis awareness campaign project. He also lauded the efforts of ACPN for the provision of vaccines and other logistic needs.

Speaking earlier, Pharm. Samuel Adekola, national chairman, ACPN, while admitting that the challenge of eradicating hepatitis had remained a tall order for mankind, however added that the global search for strategies to subdue the scourge, especially in Nigeria, necessitated the partnership with Rotary Club of Gbagada in order to organise the programme.

Highlighting the challenges currently facing Nigeria in tackling hepatitis, Adekola lamented that the cost of hepatitis test was out of reach of low-income Nigerians, saying many patients had abandoned treatment due to lack of fund or unaffordability of treatment cost.

According to the ACPN boss, the effort put in place by the association in collaboration with Rotary Club, Gbagada, by taking up the challenge to confront the scourge through mass awareness, enlightenment and screening, will yield positive results, one of which is reduction in incidence of hepatitis in the state.