Nigeria, like most African countries, has been mismanaged by her leaders since independence in 1960. Like a fairy-tale, the hopes and fantasies associated with the victory of the independence struggle soon disappeared and were replaced with despondence, strife and unending social crisis. The unity of purpose among the first generation of leaders, particularly as they fought the colonialists for freedom, did not last long and they became mortal enemies after the first election. Regrettably, they could not manage their new-found power and authority. One thing led to the other and, before they realised it, the nation was on fire.

The civil war experience was bitter, with catastrophic consequences, as so many lives were cut short, dreams shattered and hopes dashed. Since the end of that war, Nigeria has been as Max Romeo sang in his song, “one step forward, two steps backward’ – except that the case here may be five steps backward.

The looting and mismanagement by the political leaders of the second republic brought the military generals, who did not waste time to show that they were better at stealing than their civilian counterparts. The hope of better governance was restored when General Obasanjo was elected as president in 1999. It did not take long before the new president, a former military head of state, frittered away all the goodwill associated with his election and once again, dashed the hopes of the people through unending bickering with his deputy, playing god and embarking on the ill-advised attempt to tamper with the constitution and extend his tenure.

The regime of Alhaji Umaru Musa Yar’Adua was short-lived due to ill-health, but Nigerians will never forget how some cabals held the nation by the jugular and used the opportunity to further impoverish the nation. They tried, albeit unsuccessfully, to prevent the then vice-president, Goodluck Jonathan, from taking over as acting president and subsequently fought hard to prevent his election as president in 2011.

Thinking that we had a new messiah who would lead us to the desired destination, Nigerians trooped out and defied all odds to vote Goodluck Jonathan as the first PhD holder from a minority tribe to rule the country. Unfortunately, the new president faltered where it mattered most. He failed to show leadership and he succumbed to the pressure of the people urging him to “take his chance”. He opened the treasury for them to loot to their satisfaction and the nation cried to high heavens for a change, and that change we got in President Mohammed Buhari (PMB) who was elected as president in 2015.

Like most Nigerians, I believed that PMB was good for us and, at that critical period, we needed somebody who loves the nation and who would not steal. Besides, at over 70 years of age, no one expected that the new president would pursue anything that was not in the overall interest of the nation.

We were ecstatic at PMB’s inauguration and we refused to listen to those who were (and are still) crying about “islamisation’ and “nothernisation” agenda. We called them “wailers”; we rebuked them for crying over “spilt milk” and we asked them to watch as the president would turn the country into the “Eldorado” that we had always yearned for since independence.

The president started well, and we were applauding as he pursued the treasury looters and exposed the hypocrisy of the fake leaders around us. He blocked the leakages and temporarily put “professional looters” out of job through the implementation of the Treasury Single Account (TSA). He gave us cause to be happy and be full of expectations of a better deal between the leaders and the people.

Unfortunately, some unfavourable developments including low production and reduced international price of crude oil tasked the economic management ability of the government and the nation succumbed to a biting recession which severely affected the lives of ordinary citizens. Despite the unfavourable conditions of our environment, people were still ready to give the PMB government the benefit of the doubt and we all joined the chorus claiming that the bad economy was due to the actions and inactions of the previous government. I remember writing articles urging people to be patient and wait for the dividends of PMB government that would soon come their way.

Back to the past

Much to our disappointment, things are getting worse rather than get better. The old issues that we thought were gone with the old government are back in the new regime. Now, there are rampant cases of corruption by government officials and no one seems to be afraid anymore. The government itself appears to be falling apart with in-fighting between ministries and agencies that are supposed to be complementing each other. The “cabals” are back in business and they seem to be stronger this time, directing the affairs of government according to their whims and caprices.

All the gains of the change that we voted for, as being touted by the government’s information machinery, do not have a direct impact on the people. The insurgency in the north east has grown bigger after the initial lull in their activities. Some of the Chibok girls are still in captivity and others from Dapchi have been captured to join their rank. The people of yesterday have regained their voice and strength and they are shouting on rooftops that PMB should be dumped out of the presidency.

To tell or not to tell?

As we approach another presidential election in 2019, political permutations have started again. General Obasanjo wrote a letter to PMB like he did to Goodluck Jonathan before the 2015 election and, expectedly, this letter has been ignored as PMB has declared his intention to run for a second term in office.  I have also read so many articles on this subject and I particularly like the one from Simon Kolawole (THISDAY) titled “Shall we tell the President”, where he chronicled the “sins” of the president and asked him to fulfil his promises.

There are many issues to raise, at this point, with the President but the big questions are: Is he listening? Does he read what is being written about him and his government? Is anyone responsible for bringing these issues to his attention? Will he ever respond by changing the way the country is governed?

I think the problem started from the inauguration of this administration. The president dithered and allowed opposition to take over the headship of both houses of the National Assembly. It was the first test of leadership and the president failed woefully to take charge. He created a gap that those who did not share his vision for this nation took advantage to entrench themselves in positions of authority. He was also indecisive in the appointment of aides who would help him to deliver his promises to the people and, at the end of the day, he gave us a cabinet that is not different from what we are used to.

The wheels of government have continued to roll so slowly as we move from one crisis to the other: unemployment and underemployment are staggering to dizzying heights; the youths are roaming the street and finding solace in drug abuse and criminality; insecurity is the order of the day, as armed robbery, kidnapping and other vices are on the increase; ravaging and abject poverty has turned everybody into beggars and women (young, old, married or unmarried) into prostitutes; businesses struggling to survive under strenuous conditions; power failure still the same; as well as heightened ethnic divisions, particularly with killings by herdsmen.

What has happened to the president we loved so much? Where is the change promised?  I believe the situation is not beyond redemption and that the president can turn things around if he really desires to do so. He can change everything and people around him and do what good leaders do: deliver on promises.

I still think that most Nigerians are in love with the president and are hoping that he can turn things around. I have not seen a better candidate amidst those who are currently jostling for the position, especially among the ones who have the platform that can make it happen. What we probably need is a “new improved” PMB.

This brings us to the subject of this piece: What shall we tell the president? In answering this question, I considered the travails of John the Baptist, as recorded in the Bible and the question he was forced to ask Jesus when hope was fading and the situation of things around him was bleak and irredeemable. That question is relevant to our current situation in Nigeria and what I consider as the appropriate thing to tell the president will come in the form of a question: “Are you the one who is to come, or should we expect someone else?”

Or Mr President, should we look for someone else?

Over to you, sir. 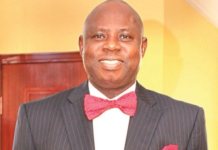