Dr Abikoye Emmanuel Olabisi is a trained gynaecologist, with many years of experience. He is the medical director of Better Life Hospital, Abaranje-Okerube, Ikotun, Lagos. In this exclusive interview with Pharmanews, he calls on government to invest more in the preventive aspect of medicine, while admonishing pregnant women to stop patronising quacks before, during and after childbirth, adding that most of the cases of post-partum haemorrhage which eventually lead to high maternal mortality are caused by unlicensed caregivers’ inappropriate attempts to manage the third stage of pregnancy. Excerpts:

Sir, can you give us a brief background to your medical journey right from school?

It’s been an interesting journey. It started from my younger days in primary school in my hometown, Edidi to be precise. It’s a local government area in Kwara State. From there, I proceeded to St. Augustine’s College, Kabba, now in Kogi State. From there, I enrolled for my A Level exams at Kwara State Polytechnic, Ilorin, where I sat for the IJMB (Interim Joint Matriculation Board) exam, with which I got a Direct Entry to study Medicine at the University of Ibadan in 1992.

I graduated from medical school in the year 2000. I spent a longer time due to strike actions by ASUU. I did my internship at the University College Hospital (UCH), Ibadan. I did my NYSC at a primary health centre in Jigawa State.

After my NYSC, I was employed by the Osun State Ministry of Health at one their primary health centres. During this period, I wrote an exam in Obstetrics and Gynaecology. I later found myself at the Lagos University Teaching Hospital where I specialised in gynaecology.  As I speak, I am a registered gynaecologist. I started this practice in 2009.

What do you think is the commonest cause of maternal mortality?

The commonest causes of maternal mortality, from the experience we have gathered in this practice, are bleeding episodes. One of the most rampant is what we call post-partum haemorrhage – bleeding after delivery of the child.

It’s obvious to us now that most of these cases are as a result of mismanagement. Mismanagement on the part of the caregivers, due to their level of experience; and also on the part of the patient, especially in environments like ours where, most pregnant women patronise quacks, under whose care, the third stage of labour is often not managed appropriately. And before you know it, they would have bled to a level of being in shock.

At this level, even an expert cannot perform any magic. It is usually critical. Some may be saved but most don’t survive it.

What should government do about the menace of these quacks?

The government needs to be very decisive without playing politics. They should support the security agents to do their jobs and those identified as quacks should be decisively dealt with – not that they should be arrested and released to continue their nefarious activities after some ransom must have been collected from them.

Government needs to be decisive, as any form of laxity on their part would not help the system. They must be ready to go all out to stop them because, it is clear that there is no magic that they can perform, especially herbal homes and auxiliary nurses.

A woman can deliver safely on her own, even at home but the problem is that when a complication arises, an unqualified or untrained person may not be able to handle it. This is the problem. It is safer and better to deliver in a hospital, manned by qualified health personnel.

What do you think informed the initial decision of the federal government to exclude private hospitals from COVID-19 management?

Just as in the case of retroviral diseases, which treatments are under the control of government, the decision of government was purely to ensure that the appropriate things were done. Our system being what it is, can be hijacked by people without good intentions who may start carrying out all sorts of unwholesome practices, making claims that have not been scientifically proven.

Just like the management of HIV/AIDS, the drug has to be effective, not causing any damage to the patient. Government was only trying to play safe, not to worsen an already precarious situation. With COVID-19, at the beginning, there was no specific drug. All efforts had been geared towards developing a vaccine for prevention. The drugs that people are using were not specifically developed to cure the disease but to improve the symptoms and conditions of patients.

Moreover, as a novel virus, which mode of operation was still being studied, government did not want to make hasty generalisations or take the wrong and uninformed decisions, bearing in mind that COVID-19 is a highly infectious disease which could spread calamitously, if allowed to be handled by everyone.

What is your opinion on the hydroxychloroquine controversy?

I have also seen doctors who have come out to say that these medications work effectively in the treatment of COVID-19. Like I said earlier too, these drugs are still in their experimental stages as far as COVID-19 management is concerned.

In our own system, we are well used to chloroquine. In fact, I wouldn’t know if that is the reason the African continent is not as hard-hit by the virus, compared to Europe and other continents. We have had a long history of battling malaria with chloroquine which, though has been banned, is still in circulation.

Sincerely speaking, I think these medications are still in experimental stages. Before you can certify drugs to be specifically meant for particular disease conditions, they must have gone through the appropriate stages. These are the reasons the federal government and the Nigeria Centre for Disease Control (NCDC) are telling us to be cautious.

What do you think is responsible for citizens’ apathy in adhering to COVID-19 guidelines?

COVID-19 is not yet eradicated and the earlier the people know this, the better for them. My candid advice to people is that they should not jettison the safety measures that they are supposed to adhere to, in order to ensure their own safety, health-wise.

I have said it several times that the African continent is favoured, even though we lost quite a number of our people. When we compare the mortality in our environment to that in other continents, like the USA and the many parts of the western world, you will see that we are very lucky and that is why many people are saying the virus does not exist. If they were in those places where the virus has killed people in their millions, they wouldn’t be saying so; they would have appreciated the magnitude of this pandemic.

What is your advice to the federal government on how to prepare for future health emergencies?

What has happened in recent times is an eye-opener and I think those in government should rise up to their responsibilities, especially in the prudent management of public funds accruing to them, not only in the health sector but also in other sectors. What we have experienced in the health sector is years of neglect and ill-preparation.  We should be grateful to God that this pandemic did not hit us the way it ravaged other continents, because it could have been a disaster.

At a time, many countries were struggling to survive. They even prepared to come and evacuate their citizens from African countries because they envisaged we might not be able to withstand the onslaught of the virus, bearing in mind the comatose nature of our health system. Fortunately for us, our story is even better than theirs. They suffered more and had more casualties, against all expectations.

Government should prudently manage public funds and they should give adequate percentages to all sectors but they should seriously improve that of the health sector to make adequate provisions for emergencies. They should strengthen the preventive department of medicine and research should be ongoing in order to prepare for what may happen next. 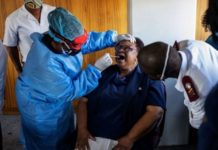