Both ginger and garlic are natural herbs, which act as tonic to keep your health fit and sound. They have many remedial properties and benefits, which are known worldwide. Today, doctors like to prescribe them, as a natural medicines, for the treatment of several health diseases.

They both have a large scale of nutritional value, which has made them unique, effective, useful as well as more powerful for good health. Several trials and modern sciences have confirmed that ginger and garlic both can be used as herbal medicine and should be consumed daily at a particular amount.

Ginger is a medicinal plant, where root portion is mainly used to consume and to cure the ailments. Ginger juices are highly beneficial and effectual in dealing with the several diseases including nausea, abdominal cramps, motion ailments, heartburn and disturbed stomach, as well.

Ginger tea is the most effective and useful treatment for morning sickness. It helps to maintain the optimum level of cholesterol in blood. It is good for digestion. It stimulates the assimilation process and makes it completed quickly and properly, as well. It is used to alleviate toothache and is very effectual and beneficial against cold, flu, cough and painful throat. It also assists in the functions of lever and assists in the elimination of toxins from the blood flow.

Garlic is regarded as wonder drug. The curative properties and advantages of garlic have widely been known to the consumers. It is used as a natural herbal drug to cure many health disorders. Garlic contains numerous potent and effective constituents, including allicin, ajoene, vitamin B, diallysulfide, minerals, saponins, proteins, enzymes, flavonoids and so on.

These elements are helpful, effectual and beneficial for good health. Several experiments on garlic have shown that it contains antiviral, antibacterial and antifungal properties. It helps to prevent atherosclerosis, high pressure, high cholesterol and cancer. It is used against the skin diseases caused by fungus.

It also blocks the inner fungus overgrowth, for example, Candida albicans. It is used to deal with colds, cancers and influenza. It helps to control the cholesterol stage in blood by increasing the good cholesterol and reducing the bad cholesterol level. Garlic contains effective and powerful antioxidants. These antioxidants protect the body from free radicals, which are poisonous and risky for our body.

Garlic and ginger tea can be used as a treatment for colds and easing the symptoms of flu, recommends the Clayton College of Natural Medicine. This use takes advantage of garlic and ginger’s antibiotic and anti-inflammatory properties, as well as ginger’s reputation for easing headache and relieving nausea. Since studies regarding these healthful properties of ginger and garlic have focused on consuming the fresh products or dietary supplements, it is uncertain whether tea made from fresh or dry garlic and ginger would impart the same healthful properties. However, ginger and garlic tea tastes good, especially with honey and lemon, and adds warm fluids to the diet when suffering from a cold or flu.

Peel the ginger and slice it into thin slices and cut the garlic clove in two, length wise. Place the water, ginger and garlic in a saucepan and bring it to a boil.
Cover and simmer for 15-20 minutes.
Strain the tea and add the honey to taste.

Ginger and Garlic tea is good for the body because of the substances it possesses.

Garlic has antibacterial and antiseptic properties.

Honey has antibacterial properties, which can help speed healing. It also can draw water out of inflamed tissue, thus reducing the swelling and pain.

More or less, ginger may be added to the pot, depending on your preference. If the tea is too potent, dilute it by adding some boiled water to your cup. Leftover pieces may be eaten or used for future extractions. Ginger can be enjoyed in this form throughout the day. Chopped ginger can also be added to food, as seasoning.

Health benefits of Garlic and Ginger

Garlic and ginger are widely known for their culinary and health benefits. Both ginger and garlic have been used extensively in traditional Chinese medicine and Ayurveda for their warming and antibacterial properties. Both are additionally classified as adaptogens, or herbs which heal gently. As both ginger and garlic are readily available in food form, knowing the benefits of each can allow you to easily incorporate them into meals for specific healing purposes.

However, if you are trying to capitalise on the benefits, check with a doctor, if you are planning to use supplements, as they may interfere with the medication you are currently taking.

Digestion has a key role in keeping you healthy. According to Organic Facts, ginger can help digestion by monitoring high sugar levels. If these sugar levels are too high, the stomach may not empty, as it should. Ginger soothes the stomach and helps return the emptying to normal state. Garlic has been known to keep digestion running well, and is especially helpful in irritation or swelling of the stomach.

Both garlic and ginger have medical properties that allow them to reduce the chances of blood clotting to occur. Motley Health states that ginger was shown to reduce production of thromboxane, a powerful blood clotting stimulant, by 60 per cent. Garlic, on the other hand, causes the blood vessels to get larger, reducing blood pressure, as well as helping the blood from clotting.

Diarrhea is a difficult problem to have, but according to studies, ginger and garlic can both help defeat the symptoms of diarrhea. The ginger helps with any stomach spasms and gas that may be in effect, and garlic can even destroy harmful bacteria that are in your intestines.

Both garlic and ginger have been touted for their natural, antibacterial properties and their ability to loosen phlegm and relieve congestion. Ginger relieves congestion, soothes aching muscles and can comfort a sore throat. Garlic is considered a powerful antibiotic and often recommended for treating colds and the flu. Used in conjunction, either through supplement form, as a tea, or in foods, such as soups and stews, ginger and garlic combined can prove an effective and beneficial remedy, when flu or cold season strikes.

Drinking ginger tea can control or diminish your swelling. Ginger can play a role in reducing inflammation and has been used for this purpose by traditional medicine for years, according to the University of Maryland Medical Center. Ginger contains natural components that are similar to those found in FDA-approved over-the-counter anti-inflammatory compounds, according to the American Academy of Rheumatology. Ginger may help relieve your arthritis pain, also. Make certain you do not drink too much ginger tea, however. Excessive ginger intake may lead to inflammation of your intestines and/or stomach. Some studies have confirmed that ginger can produce pain relief, according to the UMMC, but one trial found that it was no more effective than ibuprofen or a placebo.

Drinking ginger tea can help relieve your cold symptoms. Ginger is considered the best remedy for colds in Chinese traditional and ayurvedic medicine, according to Holisticonline.com. Ginger contains antiviral properties that may help fight your cold symptoms. Drink ginger tea at least three times daily. Make your ginger tea with either fresh ginger root or dried ginger powder. Use 1 cup boiling water and add either 1 tea spoon of freshly grated ginger root, or 1/2 tea spoon of powdered ginger. Let it steep for 10 minutes. Use ginger tea to help relieve your flu-like symptoms, such as stomach upset and/or nausea, dizziness and overall pain.

Ginger tea may help relieve some symptoms of your motion sickness, most notably nausea. Motion sickness involves symptoms such as cold sweats, excessive saliva production, headache, nausea and/or an upset stomach, vomiting, vertigo and breathing difficulties, according to the Merck Manual of Medical Conditions. Consuming ginger products, including ginger tea and/or ginger ale, can help. Ginger can be a safe alternative to prescription-based motion sickness medications, according to the University of Maryland Medical Center.

READ
Why microwave ovens are dangerous to your health

Acts as a Natural Blood Thinner

Ginger can be used to nourish and support your cardiovascular health, states the University of Maryland Medical Center. Ginger provides a natural blood thinner, since it makes your blood platelets less sticky. It prevents excessive blood clotting. In turn, this helps reduce your blood cholesterol and circulatory problems. Ginger increases your blood circulation, according to Holisticonline.com. As a cardiac tonic, mix 1 to 2 tea spoons of freshly-grated ginger with 1 cup of boiling water.

Its effectiveness against headaches has been documented. Taken at the first sign of migraine, ginger can reduce the symptoms and severity of headaches by blocking prostaglandins, the chemicals that cause inflammation in blood vessels in the brain. This anti-inflammatory activity in ginger can shorten the discomfort of headaches, colds and flu. Ginger blocks the production of substances that cause bronchial congestion and stuffiness. Its main compounds, gingerols, are natural cough suppressants.

Ginger works like aspirin to thin the blood. A study involving Danish women between the ages of 25 to 65 years, one group of whom consumed 70 grams of raw onions daily, while a second group consumed 5 grams of ginger daily for one week, showed unequivocally the benefits of ginger. When the researchers tested both groups of women, they found that ginger, more clearly than onions, reduced thromboxane production by almost 60 per cent. Thromboxane compounds stimulate the clumping of blood platelets and the constricting of blood vessels. By dissolving the clumping quality of blood platelets, ginger reduces blood clots and the risk of heart attacks and strokes. 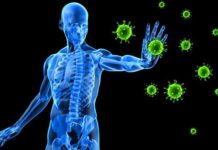 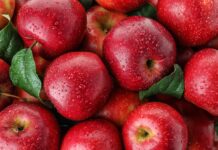 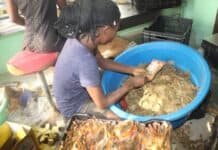