Nigeria has recorded 649 new cases of the novel Coronavirus, making the total infection in the country now 22,020, the Nigeria Centre for Disease Control, NCDC has said. 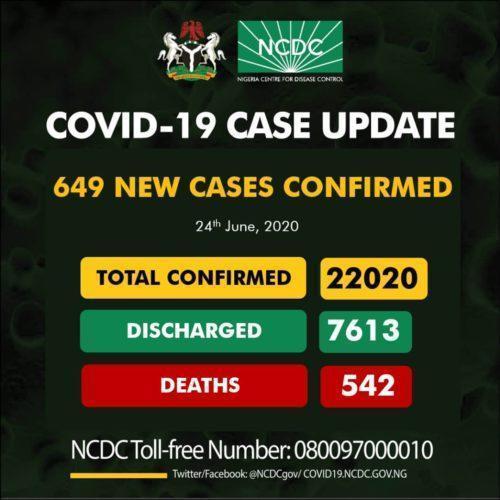 Meanwhile, a total of 7,613 patients have fully recovered and discharged.

The health agency in a tweet Wednesday night said the new cases were reported in 22 states.

The states and their infections burden are listed

As of Wednesday, 35 states and the FCT have recorded at least a case of the disease. Only one state, Cross River, is yet to report any case of the virus.

However, the Director-General of the Nigeria Centre for Disease Control (NCDC), Chikwe Ihekweazu, on Monday, said all states in the country had cases of the disease, suggesting Cross River was not free of it as the state government claims.

Lagos recorded the highest daily figure of the infection on Wednesday, and remains the epicentre for the disease in the country.

This too shall pass away

All content on this website (including text, graphics and pictures) is the property of Pharmanews Limited and protected by local and international copyright laws. No part of the content can be copied without due acknowledgement of www.pharmanewsonline.com as the by-line of the story.
Contact us: info@pharmanewsonline.com
Follow us on Facebook
Information
© 2020, Pharmanews Limited. All rights reserved.
wpDiscuz
2
0
Would love your thoughts, please comment.x
()
x
| Reply
MORE STORIES